This may not be such an impartial review.

Tucked inside the pages of a recent weekend edition of USA Today was a “special supplement” that featured five companies — Uber, Le-Vel, TaskRabbit, Upwork and Etsy — which are part of what the 20-page spread referred to as the “YouEconomy.”

“The 9-to-5 job is over,” declared the cover of the supplement, which also noted that one-third of U.S. adults have “already earned income in the YouEconomy.”

What is the YouEconomy? According to the supplement:

The YouEconomy is a growing, global movement of people who are taking the future of work into their own hands. They’re living the way they want, doing the things they want, and making as much money as they want in the bargain.

While the pieces in the supplement dole out high praise for the five companies lauded on the cover as “the best opportunities to join the movement,” a disclaimer on page 18 states that the insert comes from the publishers of Success magazine and “did not involve USA Today.” So, the glowing “articles” may not be such an impartial review.

It’s unclear whether the companies paid Success to be included in the supplement. But the publication’s ties to at least one of the featured companies, Le-Vel, a Texas-based Multilevel Marketing – a way of distributing products or services in which the distributors earn income from their own retail sales and from retail sales made by their direct and indirect recruits. that was the subject of a TINA.org investigation, is of note.

Le-Vel outperformed the other four companies based on the potential for “unlimited income,” among other categories, according to a chart in the supplement (see below). Le-Vel also was the only company in the supplement to receive an additional featured piece on an “opportunity spotlight” page. 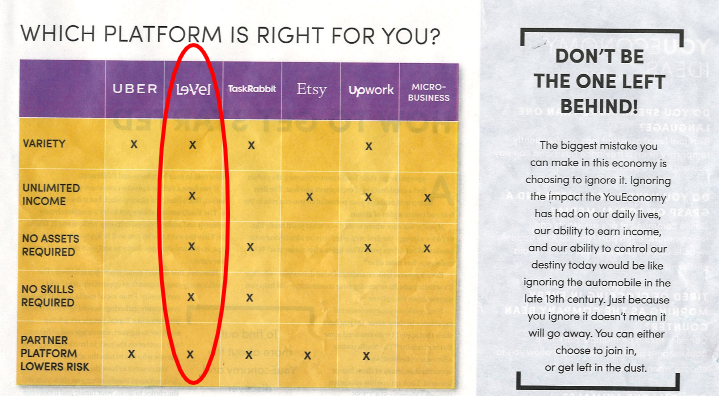 But this is not the first time that Le-Vel has been celebrated in a Success publication. In 2014 and again in 2015, Le-Vel was featured in Success from Home magazine, a publication that has also highlighted Plexus Worldwide, It Works!, ACN, and other MLMs.

The connections to the MLM industry don’t end there. Success magazine founder Darren Hardy rakes in speaker fees (for which he is paid at minimum $30,000) on the MLM convention circuit. In 2013 and 2014, for example, he extolled the virtues of Vemma, which the FTC alleged in 2015 is a pyramid scheme. The publication also hosts an annual “ideas conference” that brings together several MLM executives.

It all leaves us wondering who is the YOU that really benefits in this economy?

Success disputed the possible conflicts of interest raised by TINA.org but did not provide specific answers to TINA.org’s questions. USA Today did not respond to a request for comment.