UPDATE 12/1/15: Tommie Copper has agreed to pay $1.35 million of an $86.8 million proposed judgment to settle charges by the FTC that it deceptively advertised its copper-infused compression clothing as being able to relieve severe and chronic pain and inflammation caused by arthritis and other diseases. Under the terms of the proposed settlement with the agency, the company, among other things, is permanently enjoined from making pain relief claims or claims that the products provide pain relief comparable or superior to drugs and surgery unless it has competent and reliable scientific evidence to substantiate the representations. What follows is our initial alert about the company’s marketing claims.

Consumers purchasing Tommie Copper products pay a premium (see chart below) for copper-infused shirts, shorts, elbow and knee sleeves that the company claims will help them “feel better and live positively.” But can copper-infused clothing really improve your health?

The New York-based company, which has plans to expand into retail stores, makes both copper-infused compression wear and active wear.

The company has claimed in social media that its copper clothing can help with aches, pain and inflammation, and can help repair tissues, promote healing and stimulate blood flow. 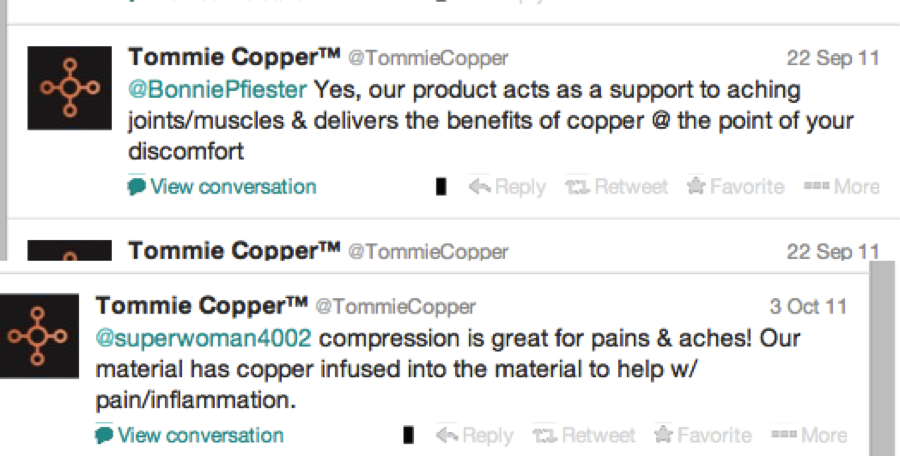 How do these claims stack up?

In short, there seems to be some science, and then a lot of exaggeration.

First: Copper, which really does not play well with bacteria, has been used to ward off icky things since ye olden days. Early seafarers figured out they could sheath their ships’ bottoms with copper to prevent sea stuff from growing on them. In modern times, studies have found that copper surfaces do kill bacteria, as much as 99.9% in two hours.

But TINA.org has found no studies that prove copper-infused clothing can help relieve aches and pains, or arthritis symptoms. In fact, three recent studies conclude that copper does not relieve pain associated with arthritis and there is some debate as to whether copper can increase or aggravate inflammation.

So think carefully before shelling out extra money for pain relief from costly copper clothing.

Marketer makes some bold claims related to the coronavirus.