Dan Newlin: The Wolf of the Florida Turnpike? 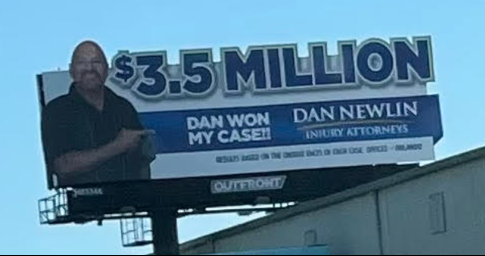 A recent trip to the Sunshine State was full of great sights: palm trees, beautiful landscapes and a barrage of billboards along the Florida Turnpike for Dan Newlin’s personal injury law firm.

It wasn’t necessarily the volume of ads or the announcement that “DAN WON MY CASE!!” that caught my attention, but rather the six- and seven-figure dollar amounts representing the size of clients’ “winnings” featured in each one. Curiosity piqued, I visited Attorney Newlin’s website, where I was presented with even more happy clients and their enormous winnings.

Similar praise is showered on Attorney Newlin’s social media accounts, where images of big checks and smiling faces are scattered throughout.

(Of note, these big check images are reminiscent of images TINA.org has frequently seen used by MLM companies to deceptively promote their business opportunities.)

But while Attorney Newlin – who claims to have “one of the largest personal injury law firms in the United States” and has a YouTube channel that has been viewed more than 1.6 million times – seems to use the law to win big for injured clients, is he simultaneously running afoul of the law himself?

Federal advertising rules mandate that ads using testimonials feature experiences that are generally achievable or typical (or, if not, clearly and conspicuously disclose what consumers can expect to achieve). Florida’s Rules of Professional Conduct for lawyers echo these requirements, stating, in relevant part, “A lawyer may not engage in deceptive or inherently misleading advertising,” which includes using testimonials that are “not representative of what clients of that lawyer or law firm generally experience.”

So the question is, do Attorney Newlin’s clients typically win six- and seven-figure amounts (and, if so, is that before or after he deducts his cut)? Or is he violating truth-in-advertising laws and legal ethics rules? (He’s certainly aware of at least some of the rules that apply to his ads, telling one concerned consumer on Twitter that the Florida Bar mandates that clients cannot be compensated in any way for doing a testimonial.)

A closer look at Attorney Newlin’s website sheds some light.

All the way at the verrrrrry bottom of the site is the following fine print:

Other disclosures appear in Attorney Newlin’s video ads (many of which have been viewed thousands of times) for fewer than eight seconds in fine white print at the bottom of the screen while clients loudly boast about their enormous winnings, and at the bottom of his billboards (stationed above a highway with a 70 mph speed limit) in almost impossible to read print.

These disclosures not only suggest that the advertised results may not be typical, but also state (at least in the disclosure on the website) that large lawsuit winnings such as Nakishia’s $500,000, shown above, did not deduct Attorney Newlin’s fees (plaintiffs’ attorneys typically take approximately a third of their clients’ winnings), or any other expenses, including, for example, paying for expert witnesses or their medical bills.

It’s also important to keep in mind who Attorney Newlin’s bold ads are targeted at: injured, and oftentimes suffering, consumers looking for help to pay their medical bills and get back on their feet.

TINA.org reached out to Attorney Newlin’s office regarding this advertising campaign. In response, a representative from his office could not say whether the advertised dollar amounts represent typical client experiences but informed us that the Florida Bar Advertising Committee approved the ads. We contacted the committee to inquire. In response, the committee stated that it has not reviewed all of Attorney Newlin’s ads, and of those it has, the committee only performed a “facial review.” Further, the committee specifically reminded Attorney Newlin — in the form of a letter, a copy of which it provided to TINA.org — that testimonials in ads are prohibited unless, among other things, they depict experiences that are representative of what clients of the law firm generally experience. As such, the committee declined to provide a notice that the ads comply with the Florida Bar’s rules.

In the end, while consumers outside central Florida may not be inundated with Attorney Newlin’s ads, consumers everywhere can use this as a reminder to be vigilant when searching for a lawyer, which means doing their research, reading the fine print (where possible) and asking lots of questions before signing on the dotted line.

And consumers can also make their voices heard this spring as the FTC considers proposing a rule to address deceptive income claims used in marketing and seeks input from the public.

Fighting Back Against Fake Reviews

Fighting Back Against Fake Reviews

Will it take a village to bring the world’s largest for-profit thrift retailer to justice?